I went home last night and found my husband making dinner. I could see we had a little while before it would be ready, so I told him I was going to hurry out and mow the lawn before we ate.


"Oh wow! Thanks! Well, then I'll run over and get the straw for mulching the garden."


"Already got it. It's in the backyard."


And he'd cleaned the pool. And done the grocery shopping. And filled the hydroponic tanks with more solution. And booked the vet for the dogs. And dealt with a crisis (baby accidentally locked in hot car - called the police - ended up breaking the window to get him out - all's well).


In short, everything I could think of that needed doing, he'd already done it. And today he's going to go sit at the shop for four hours while they fix the car window. He's positively heroic.


As Father's Day approaches, I feel more and more grateful for the man I married almost 30 years ago.

Today was a lovely memorial for my friend Tracey, who died six months ago. Seems weird to think it has been six months already. It was a lovely, sunny day, lots of people attended, the sentiments expressed were perfect, she was given a posthumous leadership award from the industry in which she worked, and the garden Jon has planted in her memory is going to be beautiful with wild flowers. But it just felt so sad to be at her home without her there. I kept expecting her to come out the back door, smiling and welcoming everyone...and then I'd remember. Which I guess is what one is supposed to do at a memorial, but still.

When it's my turn to go, I want a quick graveside service with just a handful of people. Pop me into the wall, have a dedicatory prayer over the grave, someone can play a piobaireachd on the pipes, and then I want everyone to go out for Fish and Chips. Short and simple. Have a deep-fried Mars Bar for me.

Miss you, Tracey. You were my friend, my sister, and an inspiration to me, and always will be.
Posted by Kristen McKendry at 19:07 No comments:

I gotta admit they're starting to freak me out 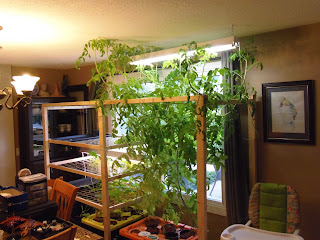 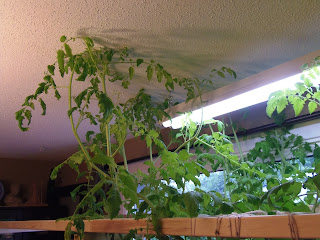 They've hit the ceiling, looped down, hit it again, and now we're starting another downward loop.
Lots of flowers, but I'm thinking we're not getting enough light, because no fruit is setting despite applications with the paintbrush.

Posted by Kristen McKendry at 19:00 No comments:

An update on the tomatoes. 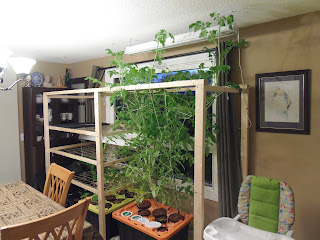 Posted by Kristen McKendry at 05:35 No comments:

The Gardening Season has Begun!

And we're off! I spent six hours yesterday weeding, forming squash hills, and generally getting ready for planting in a week or two. Ordinarily we aim for the Victoria Day weekend, which is in a few days, but it is still quite chilly at night. Hardening off my seedlings but rather half-heartedly, because I think we'll have to wait another week, to be safe.  Here's what it all looks like right now: 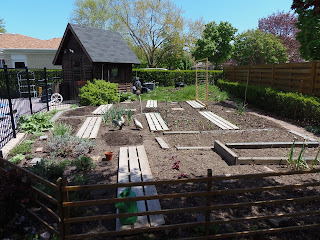 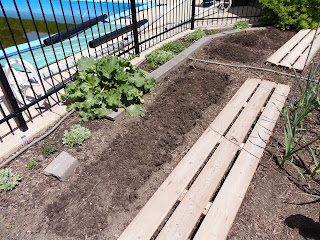 Trying an experiment, planting squash in ridges or really long mounds instead of individual hills, to save some space. Looks a little like I've hidden a body... 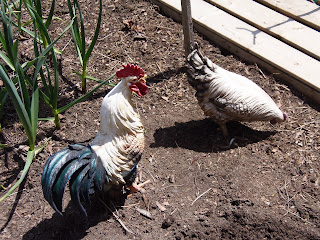 And it's always fun to add a touch of whimsy...since I can't have live chickens in my area. 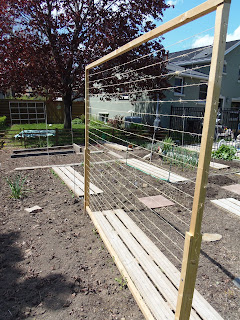 The pea support my husband built. 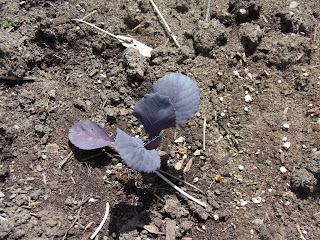 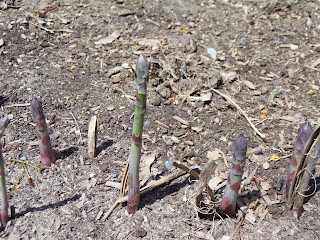 A good asparagus crop this year. 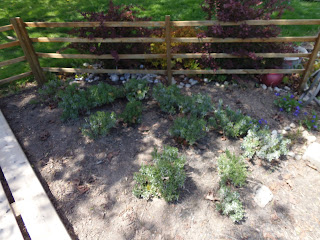 And lastly, the lavender I started from seed is doing really well.

Welcome to my world!

My husband recently had hernia surgery. Lying in the hospital for three days, he got to talking with his roommate, who was a farmer from Kansas. It sounds as if they had pretty interesting philosophical discussions, and one observation the farmer made was how amazed he was at the cultural and racial diversity in Toronto. He couldn't figure out how we all get along so well, considering "No one speaks English!"

I thought about this for a while and concluded that we all get along pretty well because we don't share a common language. It forces us to slow down and really listen to each other with the intent to try to understand. We have to reach out and meet the other person half way and put effort into dialogue in order to conduct day-to-day business. That is a great thing, when you stop to think about it.

I'm currently reading John Seymour's The Self-Sufficient Life and How to Live It for about the sixth time, and the part I'm in now talks a lot about the necessity of diversity in maintaining a healthy farm. The downside of mono-cropping has been talked about a lot, but he also points out how you need multiple kinds of animals as well. Focusing on only one (for example, just raising sheep and nothing else) is as detrimental to the soil and the farmer as mono-cropping is. You need diversity in the bugs and bacteria. And you need a community of different people -- you can't be entirely isolated and try to do everything on your own. Even the most self-sufficient of people need other people, and being too independent is as unhealthy as being too dependent.

With this in mind, I went out Friday evening and bought two new kinds of flowers to add to my garden (which is heavy on the annual vegetables and light on the flowering perennials). I'm hoping the pink Lupines take over a bare spot in my yard, set off nicely by the Soapwort around their base. And I planted the little orange-blossomed Avens (Geum urbanum), also called Herb Bennet or Clove Root, where the flowers will show nicely against the green stucco of my house. Its roots can be used as an antiseptic, and in the Middle Ages were believed to fend off evil spirits and venomous beasts. So I'm set should any show up.

Itching to get the vegetables into the ground, though we still have a couple of weeks until last frost. My seedlings are straining at their pots, and my hydroponic tomatoes are about nine feet tall now, brushing the ceiling, collapsing back on themselves, then reaching the ceiling yet again. Lots of flowers but no fruit yet, in spite of my daily applications with the paintbrush.

It's raining today, so I can't do much useful stuff outside. Instead I plan to go to Lee Valley to buy a propane wand to burn weeds with. Between that and the Avens, my bastion will be sufficiently fortified.
Posted by Kristen McKendry at 07:15 No comments:

Things I Saw in the Last 24 Hours

Posted by Kristen McKendry at 13:27 No comments:

My publisher put out an ad for another author saying that in spring your thoughts turn to romance...

I don't know about you, but in spring my thoughts turn to:

Posted by Kristen McKendry at 17:26 No comments:

We went to the Highland Games in London, Ontario this weekend, and coming home my husband and I took our time, meandering in a leisurely and aimless fashion down through Port Stanley, Port Rowan, Port Bruce, Port Burwell, and then up to Tillsonburg and then home. I am not familiar with that area at all, so it was all new and delightful to me.

Newly-sprouting fields in vibrant green that felt like velvet rubbing on my eyeballs. Beautiful homes and farms with black bird-netting set up over the strawberry fields like canopies---I half expected a block party. Lots of tall, gorgeous churches (three with beaming wedding parties posing for photos on the front steps). Trotting yearlings and goats climbing on children's toys and people walking with beautiful golden retrievers. Winding rivers and barren docks thrust out into gray water. Older couples walking on the beaches hand in hand. Muscular-looking tug boats that scoff at the sleek but wimpy pleasure craft. Two teenage boys misjudging the amount of water trapped in the earth at the lake shore and getting stuck in chocolate-coloured mud.

As we rounded a corner coming out of Port Burwell, we saw a cute little white house and red barn for sale, overlooking Lake Erie, and stopped to write down the agent's name and number. I looked it up when we got home. Forty acres with paddocks and chicken coop running right down to a sandy bluff, with five acres of hardwood. The house itself needs some work and it probably cost a little more than it was worth. And it was too far out to be able to commute to my current job. But quiet and serene, with water, fuel source, and farmland all together. Raise organic eggs? Hydroponic tomatoes in the barn? Zen retreat with the hay mow converted to guest rooms? The mind zips around with ideas.

Home again to my pretty home with its nice yard...and its neighbours. And traffic sounds. It's convenient to have Tim Horton's and a WalMart within walking distance. But you trade off for that convenience, and I'm more and more reluctant to make that trade.

Posted by Kristen McKendry at 06:15 No comments: