I have long been hooked on Britain's "Escape to the Country," a show where friendly real estate agents take buyers to look at three properties to choose from -- all of them always set in absolutely stunning countryside locations. They're usually in quaint villages, and might range from 15th-century barn conversions to Tudor homes striped like zebras or stone cottages with low-beamed ceilings. Once in a while you'll get something more modern. Sometimes vast tracts of land and sometimes easily-managed little gardens or courtyards. Often they have holiday-let potential. Once they even took us to a home that was a land-lease...from the Duchy of Cornwall. Imagine having Prince Charles as your landlord!

But the other day I discovered another show, with the same estate agents, called "Escape to the Continent." They take British buyers to places like Brittany, Portugal, Italy, and Cyprus to look at properties for sale there. It's the same luscious, fantasy-inducing show but on steroids. I've recorded four episodes and I'm going to sit down tonight with a plate of pasta and completely indulge myself.

These shows are dangerous because they inevitably get me thinking things like "How soon can I retire?" and "Well, the kids could always come visit us, couldn't they?" and "How many more years until the dogs die?" Well, maybe not the latter. But imagine the freedom to pick anywhere you wanted to go and just moving there! Of course, now with Brexit, it may be the end of that show, I don't know. Certainly people will have to rethink just picking up and moving to Europe. But it gets me pondering...How much like France would Quebec City be? And I bet parts of Newfoundland are like Norway. And Nova Scotia could pass as Scotland any day.... Maybe moving "abroad" is possible without even leaving this country.

It's been -38 here much of the week, and Cyprus or Portugal sound pretty nice right now... I have to remind myself summer will come again. I mustn't do anything rash just because winter has me down... 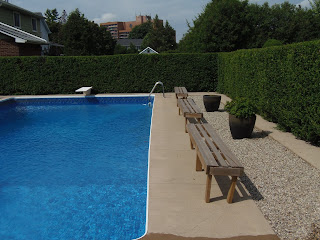 Posted by Kristen McKendry at 16:06 No comments:

The temperature has slid down to about -30 in this area the last couple of days. The snow has a grainy consistency, like tiny ice pellets, and is light to lift. Which is good, because there's a lot of it.

After spending 29 years in Canada, I have learned how to tell the temperature pretty accurately just by how I feel. Pained cheeks but eyeballs okay means about -15 C. Nostrils stick together when you inhale means -20 C. Eyeballs prickling means -30 C. We're to the eyeball stage.

Made peanut butter cookies and lemon poppyseed cake yesterday. Reorganized and culled my CD collection. Read for a while (Mugged by a Moose). Did some needlepoint. Shoveled snow. Shoveled my neighbour's snow. Met a new neighbour. Got my Sunday School lesson ready. And about then my husband woke up so we had a nice time watching a Swedish series together on Netflix...
Posted by Kristen McKendry at 05:47 No comments:

Just returned from five fabulous days in New York City with a good friend. I knew the trip was going to be delightful when the flight attendant on the way there introduced herself as Malaria. It only got better from there. We stayed at the Towneplace Suites at Times Square (Marriott) in the Theater District -- a place I highly recommend. I love staying in hotels, from the achingly white bedding to the white smooth tablet of soap like a Mah Jong tile. This particular hotel had fantastic breakfasts and friendly staff. I've decided all I need to get by in life can fit in my carry-on gym bag. And if the airline loses that, all I really need is in my purse. The feeling of travelling so light is so freeing!

We packed a lot into those five days and saw just about everything we had hoped to see despite the government shutdown -- the New York City Public Library (and went back to the hotel to watch an apocalyptic movie that took place there), The Met (after reading From the Mixed-Up Files of Mrs. Basil E. Frankweiler, of course), the Empire State Building, Times Square, the Staten Island ferry and Statue of Liberty, the M&M store, FAO Schwarz, Grand Central Station, Rockefeller Centre complete with ice skaters, the Nintendo store, St. Patrick's Cathedral, and a host of other things.  We went past Radio City, the Chrysler Building, Tiffany's (and went back to the hotel to watch Breakfast at Tiffany's), Wall Street, and Bryant Park and saw the Brooklyn Bridge. We rode the subway, which was surprisingly clean and easy to ride. We saw the graves of Alexander Hamilton, Robert Fulton, and James Lawrence at Trinity Church.

And the food! My first impression is that New York City smells good. Everywhere there is barbecue and sausages and just wonderful fragrances coming from the street vendor carts. We ate a delicious warm kale and brown rice salad at Cafe Metro, Junior's blueberry cheesecake, a salty pretzel from a street cart, and a great cheeseburger and fries at Shake Shack. And I had the best crisp thin-crust broccoli/black olive/red onion/green peppers pizza, and chicken/red peppers/ricotta/onion/parmesan stromboli as well, at the Pizza Cafe at 747 8th Avenue. And decided I need to move to New York just so I can eat there every day. Sunday we went to church (beautiful organ, stimulating discussion in Relief Society) and then walked through Central Park. The weather cooperated, and I couldn't have asked for a better time.

After pounding the streets most of the day, we returned to the hotel to watch the above movies along with some others with New York themes or settings. And read a couple of books. And ate bean burritos and drank Silk soy milk. And watched HGTV and fell asleep to the melodious harmony of car horns that is the night music of New York.

Three highlights stand out in my mind, though, from the trip. One was the 9/11 Memorial, which was a solemn and impactful place to visit. The water disappearing into the dark "bottomless" holes really affected me, the names row after row of the dead, the soaring height of the new building showing how tall the two towers had been... It was just a lot to take in, and I felt I was walking on hallowed ground, somehow.

The second thing that stays with me is the long walk we took on the Highline, an old raised railway berm that wanders from about 34th street to 15th street. In the summer it must be beautiful, though at this time of year it was brown and chilly. The condos along that park are amazing and the architecture was stunning. My friend and I imagined which one we would select to live in. Manhattan is remarkably walkable.

The third thing was the Broadway show we saw -- Come From Away. What a wonderful way to end our trip! The foot-stomping music, the high-energy performance, the incredible voices, the humour, the Newfoundland speech, the clever use of only a handful of actors to play so many parts---it was just fantastic all around. We sat in the same aisle as other Canadians, and I just basked in the whole evening. Want to listen to the soundtrack again, as it moved so fast I'm sure I missed some things. Canadians are such likable folk! I think it added something to the show to watch it in New York City, where I'm sure many of the people sitting around me in the audience were personally impacted by 9/11.

All in all, a marvelous five days! And a wonderful friend to travel with. Thanks, Sheri!
Posted by Kristen McKendry at 20:32 No comments:

Off to the Big City

I am away for a few days on a trip to see a friend, so I won't be posting for about a week. I've put up my blog posting on My Year of Cheese a couple of days early. I've watered the plants. I'm packed and ready. It's 6 a.m. and the flight doesn't leave until 6 p.m., and in my mind I'm already on it.

I know most people dislike airports. The hassle, the line-ups, the stress of it all. Well, true, it's a bit nerve wracking. But once I'm sitting in the departure lounge, looking out the big windows at the itty-bitty plane that's going to be carrying me off into the clouds, I'm blissfully happy. There's a feeling of adventure, of "Finally! I'm on my way!" The place is stuffed with possibilities. What would happen if I got on that plane instead of this one? What different lives are criss-crossing all around me? I like to watch other passengers and the way they deal with stress and boredom. I like to guess where they're from and why they're travelling and who will be waiting for them at the other end. I like imagining who they are talking to on their cell phones at 4 a.m., just to say "I'm at the airport." Surely anyone who knows them well enough to be woken by a 4 a.m. phone call already knows they're travelling.

There are so many places I want to see before I die. Iceland. Norway. More of Italy. Ireland. Northern Scotland and Wales. Australia would be amazing. Costa Rica. British Columbia and the Yukon. Cape Breton. The list goes on, but I think the highest priority is - of all places - Washington State, because I want to see my sister's farm. Hopefully next summer.

Maybe I like to travel so much because it's so wrapped up in stories, and I am, after all, a writer. Each person in the airport has a plot line they're following, and somehow on this particular day, they've all interwoven in this one space, for however brief a connection. It reminds me how we're all just little threads in a vast tapestry.

See you in a week!
Posted by Kristen McKendry at 06:23 No comments:

Well, that hope died pretty quickly! It's about -15 today and the snow is coming down thick and fast. They're calling for a good dump of it tonight. The wind is shaking the windows and banging the outside flap in the oven hood vent (like a child banging a pot lid). The snow is coming down sideways, and I can see a weird little circular eddy of wind stirring the flakes up like a mini tornado on the pool cover. Fascinating!


Brio is curled up on my foot letting out little impatient whines like the slow air leak of a punctured inner tube. He wants a walk, but I am not sure I want to brave this chilling wind right now. Then again, if I don't go now, it may mean wading through a foot of snow later. Out I'll go, and then I'll turn on the fireplace channel (because our gas fireplace isn't working) and curl up with a novel. That's what winter's really for! Every so often I have a fit of temporary insanity and consider taking up snow shoeing or cross-country skiing, and I still want to try dog-sledding. And then the reality slaps me in the face when I open the door to the stinging-cold wind, and I realize I'm really not the Arctic Adventurer type. Hot chocolate and Barbara Erskine it is!
Posted by Kristen McKendry at 15:28 No comments: