We are off to Italy tomorrow, and I won't have access to Internet, so you won't be hearing from me for a couple of weeks. I will be scribbling thoughts and poems while I'm away, though, I'm sure, and will inundate you with blog posts when I get back.

A Helpful Hand...er...Mouth in the Garden

My husband and son trimmed the gigantic hedge in our yard on Saturday. My son was piling sticks and twigs in a heap to one side, but he noticed the pile was growing faster than he could account for. So he watched...and Brio the Wonderdog was quietly collecting sticks from around the yard and helpfully adding them to the pile. My son said Brio contributed about 15 sticks.

Maybe he thought my son was preparing for the Biggest Game of Fetch of All Time.
Posted by Kristen McKendry at 07:21 1 comment:

Lots on my plate right now - travel, harvest, house renos - but the only thing I seem to be doing is watching Saving Mr. Banks and eating Nutella straight from the jar. It feels like the most important thing to do, really...
Posted by Kristen McKendry at 07:19 1 comment:

The Worth of a Soul

My friend Ayse Hitchins was recently interviewed for www.interestingcanadianmormons.com and I'd encourage everyone to go listen to the 2-part podcast. She's the fascinating lady I wrote the biography about, The Worth of a Soul.
Posted by Kristen McKendry at 05:19 No comments:

Irony in the Garden

Why is it that the golden chain tree I pamper and fuss over struggles and dies, but the volunteer oaks and maples in my hedge that I repeatedly behead flourish and thrive? The tenderly cared-for vegetable seedlings in my garden gasp and fade while the maltreated weeds next to them zoom off like rockets.

Yeah, yeah, I know. Native species and all of that. But it hardly seems fair. Luckily the weeds are mostly edible, because the veggies aren't doing too well. Today's salad has:
I only planted 5 of those. The rest are volunteers.
Posted by Kristen McKendry at 12:18 No comments:

I was riding the subway yesterday when they announced the train would be turning back at Jane Station due to a fire investigation at Islington. So we all dutifully got off the train and stood there on the crowded platform, waiting. I noticed two men speaking in sign language together, looking confused and concerned. So I went over and signed to them to ask if they were deaf. Yes. I explained I was hearing but I have studied ASL, and did they need help? They asked me what was happening, and I was thrilled I was actually able to explain to them about the fire investigation to the west, and how trains had to turn around at this point. I didn't know how long it would take or if there was a bus. The police were investigating.

And they UNDERSTOOD ME! It was exciting to find out that this stuff I learned in class is actually really used! I know that sounds silly, but I had the same feeling the first time I tried to use French, Welsh, or Italian with someone outside a classroom. Look, they actually do speak it! Even the little kids speak it! It's a living thing!Woohoo! And it felt good to know I hadn't been wasting my time learning nonsense. (Though of course when they fired rapid signs back at me, I didn't understand anything but the word "bus.")

I don't know if anyone else ever experienced something like that. Logic says of course this is a real language, and they will understand if I try to use what I have learned. But when they DO, it's an amazing feeling. Houston, we have established communication!

I have also found that whatever language I learned just previously keeps interfering in whatever language I'm trying to learn currently. When I learned Welsh, French kept oozing into my vocabulary. When I learned German, Welsh would squeeze into any available vacuum. When I open my mouth to speak Italian, German intrudes. Hebrew rears its head unexpectedly when it comes to little words, like "but" and "and." Sometimes I know what a word means but I can't for the life of me tell you what language it is. I have come to understand my distant-cousin Shon, who spoke about 11 languages fluently. You would be listening to him speak German and understanding all right, and suddenly you realized you had lost the thread of the conversation and you weren't quite getting it...and you realized he had switched mid-sentence to Danish. Or Dutch. Or Norwegian. Or---on one memorable occasion---Icelandic. He didn't realize he was doing it. To his brain, it all meant something, he understood it...so who cared what language it was being processed in? It was all one, to his mind.

I will never be that fluent and able to flow in any chosen language the way Shon does. No one will ever mistake me for a native of any of these languages (probably the same is true for English!). I still have to sort through the filing cabinet in my brain to find the phrase I want...Os gwelwch'n dda...s'il vous plait...bitte...por favor...oh yes! Per favore! There it is! In the bottom drawer, tangled up with stray bits of Bislama and leftover Mandarin. Like finding a paper clip in the kitchen junk drawer.

But it's a joy and a treasure hunt, trying to dredge up enough words to convey meaning to someone of another language background. I am hoping on this trip to Italy this summer that I will set aside my natural reticence and self-consciousness and dare to just open my mouth and speak. I want to know these people, to immerse myself in their country and culture, to learn a bit more about how we all fit on this planet. The key to that is language.
Posted by Kristen McKendry at 07:35 2 comments:

Judging Books by Their Covers

So now that I've got myself thinking about book covers, I think one of my favourites is Susanna Kearsley's The Shadowy Horses. 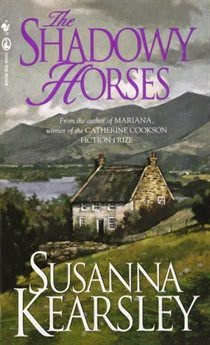 I always prefer scenery to people on book covers. So, my dear readers, what covers are your favourites? And be honest - do you choose books by their covers?

More and more lately I find I choose my books by the size of the print and the weight of the volume. Will it fit in my backpack? Will it aggravate my tendonitis to hold it? Will I blind myself trying to read it in dim light on the bus at 5:30 in the morning?
Posted by Kristen McKendry at 18:55 1 comment: