The Shoemaker's Elves Have Moved to the Garden

On Sunday I did something I've never done before. I asked for help weeding my garden. Even though I know the Relief Society (a charitable LDS women's organization I belong to) is there to help people, I have always been on the giving end and never on the receiving. It isn't in my nature to ask for assistance unless it's something I really honestly can't do for myself, like digging out a massive tree stump or lifting a chest freezer. But this week I admitted defeat in the face of the weeds brought on by all this rain, and I told the group I'd throw a root beer float party for anyone who wanted to come help weed. Instantly I had volunteers, some of them women I really don't know well.

Two of them came last night, ahead of the rest of the group, and between them they cleaned up most of the garden. They were careful, deliberate, and did a great job, and it was like magic, coming home from work and finding it done. One of the ladies is a spry 70 years old, and her last name, appropriately enough, is Shoemacher. The Shoemaker's Elves did indeed visit my garden last night.

I admit I am resisting this lesson I'm supposed to be learning, to open myself up to others, to let them serve me as I serve them, to let them care about me. It's a weird thing, being on this end of things. You always feel there are others who need help more, so how can I complain? In the grand scheme of things, is my vegetable garden that important? Well, no, but it is to me.

There is a hymn we sing that says the errand of angels is given to women...to cheer and to bless in humanity's name. I was on the beneficiary end of that last night. Yet another lesson in grace.
Posted by Kristen McKendry at 08:43 No comments:

Congratulations at the Cambridge Highland Games

I'm pleased to report my son won the piping competition in his division at the Cambridge Highland Games on Saturday. It's pretty impressive to me that a 14-year-old boy can get up in front of a judge and play without being nervous. But I'm equally proud of my not-14-year-old friend Tracey who can get up in front of a judge and play in spite of being nervous. I really admire how she can challenge herself, set herself difficult goals, and carry them out without anyone else cheering her on or even necessarily knowing about them. I don't have that kind of drive myself, so I really admire it in her. I do have a streak of perfectionism in me, but if I know perfection isn't going to be the likely end result, I tend to give up and not do it at all. Thanks, Tracey, for being such a great example, to me and to my son.
Posted by Kristen McKendry at 19:45 No comments:

Zen and The Art of Being a Dog

Brio was neutered a couple of weeks ago, poor chap. Things went somewhat awry and he ended up very swollen and bruised. I swear it looked like they'd held him down and wrestled the things out with pliers. All dogs act pathetic in a cone, but he was in real pain. We went back to the vet and did what we could for him. I can't imagine what I would be like if you bound me so I couldn't inspect or care for an injury like that inflicted on me. I'd be climbing the walls and protesting loudly. But sweet, slap-happy little Brio accepted it all. He wasn't pleased, and he reminded us frequently of how sad and uncomfortable he was. But really, he accepted the cone and the circumstances, accepted that he couldn't get at the site, and patiently bore all that was inflicted on him. He would lie resignedly on the couch looking like that droopy Pixar lamp. And when we returned yet again to the vet, he bounced in to wag his tail and lick the now familiar faces of the people who had inflicted this on him, not holding any grudges.

There was no way to explain to him what was going on, and that this discomfort would be temporary. For all he knew, he was going to spend the rest of his life in that cone. But he---and I've noticed this in all dogs---didn't spend his time wishing things were otherwise. He coped. He figured out how to eat and drink with the thing on. He accepted that he could no longer fit on the back of the couch or chase balls or hold a bone between his front paws to chew on anymore. He was just in the moment, resigned to that moment, with no anticipation of the future. And Maple, my other dog, accepted without a blink that his friend could no longer play tug-o-war with him.

How often do I spend my time champing away at my restraints, bewailing my fate, howling my disappointment, and protesting discontentedly at my situation? I need to be more like my dog. Riding the moment and waiting to see what happens next, with no expectation, no judgments, only openness.

The cone is off now, he's pretty much healed, and life has resumed its slap-happy pace. He went bounding around the backyard barking his head off for sheer joy. Broadcasting to the dogs of the neighbourhood: The Cone is Off! Repeat, The Cone is Off! I doubt he carries any of his recent patience into the next phase of his life. But I will. I've learned something about Zen from Brio.

Once he had his microchip, we licensed him with the city. And they got his name wrong; they listed him as Biro instead of Brio. Another Italian word. My dog went from being a soft drink to being a beer.

Such is life.
Posted by Kristen McKendry at 20:28 No comments:

So we didn't check the supply of crickets before the long weekend, and we only have two left. So in desperation I went out to the garden and brought in five small earthworms and a little caterpillar. Rinsed the dirt off. And put them in the bowl in the chameleon's cage. My goodness! He scampered - if such a slow-moving critter can be said to scamper - and slurped them up like spaghetti. And sat in his bowl looking expectant until I put in more. I don't know how good they are for him, but he certainly likes them. Maybe even chameleons get tired of a cricket-and-superworm diet, day after day. How horrible it must be, to be stuck in a cage and unable to go forage for one's self. To be stuck eating whatever is put before you, with no other options and no way to request a menu change.

I went to the farmer's market on Saturday and found myself growing increasingly depressed as I went up and down the rows of tables laden with local produce. I miss being able to grow it all myself. I miss the option of going out to the backyard and returning with everything I need for a meal. I can't bring myself to buy zucchini, when most years I have such a surfeit of it. And who wants to buy a pepper with a sticker on it? Really? Stickers on my food? Why not just print a barcode right on it?

I know this year is unusual and hopefully by next year I will be able to garden again at the same intensity as before. Until then, I have to be satisfied with Styrofoam green beans (really, how big are they trying to grow them??) and questionable basil. I'll have to knuckle under and purchase zucchini (and hope that no one I know is watching this fall from grace). This is my year to do things I never envisioned I would do. 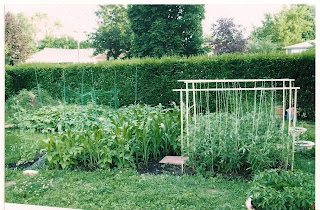 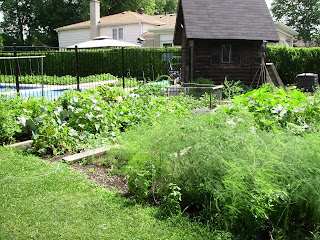 Posted by Kristen McKendry at 19:42 No comments: