There's the hint of spring in the air. The hyacinths are an inch tall, just poking their noses out of the ground, and the snow has melted off to reveal surprisingly green onions still left from last year's garden. If you don't harvest all your onions and leave some in the ground over winter, they'll go to seed the second year. Sometimes I collect the seeds, and sometimes I let them fall wherever they like, and I get baby onions springing up all over the garden. Who says things have to grow in tidy rows? I do the same with cherry tomatoes, radishes, and garden huckleberries, letting some fall, and I always get vigorous volunteer plants the next spring that produce as well as the ones I nurture tenderly and transplant out. Why go through the work of starting seeds and planting out if the garden will do the job for you?

Having said that, one of my favourite things is to start seeds in the early spring. There's something about the scent of damp soil, the finickiness of planting in tiny pots, that energizes me. The trays of seedlings sitting happily under the grow lights make me feel proudly maternal. After a winter of drooling over seed catalogues, I make my selection (or dig out the seeds I harvested and saved from last year) and get down to...pardon the pun...plotting. How many pots can I fit on my counter? How many extras should I plant just in case some don't survive the rabbits? How many tomatoes can we really eat? How much should I grow extra for the kids or to give to my ministering sisters at church?

This year I'm planning to build some raised beds and level off a sloped part of the yard to make room for more garden. I'm going to limit myself this year, though, and instead of planting a little each of forty varieties, I'm concentrating on only tomatoes, squash, lettuce, green beans, and cucumbers. (That doesn't, of course, include the perennials such as asparagus and rhubarb.) I ordered three new varieties of tomato from the University of Florida that are supposed to be disease-resistant and good producers. I'm also growing cherry tomatoes and Red Pear cherry tomatoes, making 21 plants in all. (That's nothing. One year I planted 55 Roma tomato plants and still ended up buying in some bushels. We eat a LOT of tomatoes.)

I'm also doing Armenian cucumbers, Ronde de Nice squash, spaghetti squash, and zucchini. LOTS of zucchini. Like, 18 plants. I know, I know, you probably think I've lost my mind. But now that we're cutting down on carbs, we eat zucchini almost every day, sometimes for two meals a day, and it freezes well. And I inevitably lose a few plants each year to rabbits, and the last few years it's been so hot the plants mainly produce only male flowers so I only get a couple of squash per plant anyway. I will fill in any gaps in the garden with green beans, my favourite vegetable, which can be frozen too. I'm still eating last year's harvest, which should last right up until the new crop begins to produce.

After watching Love Your Garden with Alan Titchmarch, I'm also contemplating putting in a pond. Just a little one, with a few bog plants, to attract frogs to the garden. And putting up bat boxes. And maybe some bee boards for wild bees to nest in. If I can't move to the country, I will make the country come to me.

There's a feeling of triumph, this time of year, at having survived another winter. I love the anticipation of gardening, the feeling of planning to feed my family. When the tiny sprouts are starting to rise under the lights, I survey them with great satisfaction...and try not to think about how my back will feel planting them out in May.

Posted by Kristen McKendry at 04:25 No comments:

My word, I can't believe how long it's been since I last wrote. My apologies. I feel like I've spent the winter curled up in a ball on the couch, and only now am I starting to emerge timidly into the light, like a mushroom, blinking in the unfamiliar sight of the sun coming up over the rooftops.

Today was glorious, though, and I was drawn out into the afternoon in spite of a wickedly strong wind and chilling temperatures. The sunshine was amazing, the sky was so blue and filled with puffy clouds like wads of quilt batt, and it was impossible not to whistle up Brio and stride out. We hit the path that leads through the woods to the library, Brio's ears flying back in the breeze. He waddles a bit now -- looks like a caramel-coloured sheep, plump from too little walking this winter. Me too, truth be told. Hopefully some of the excess weight will drop off as we increase our activity, energy levels rising with the sap.

The trees are still bare, of course, though the crabapples have just the faintest promise of hazy pink buds starting to form. Walking through the woods at this time of year is odd, really -- during summer you can't see a thing past five feet into the thicket, but in winter you can see right through the bare trunks, the scoured floor of the forest, to civilization beyond. In the summer you aren't aware there are houses around the edges, but in winter you're looking right into people's backyards.

There's no sign of trilliums yet, but in a few weeks they'll be thick and white on the ground. That will be followed by a gauzy veil of palest green as the buds begin to unfurl, the lamb's quarters will shoot up, and the houses will disappear again for a few months, like Brigadoon.

With no foliage on the deciduous trees, you're also suddenly aware of the tall white pines scattered sparsely through the forest. They stand out green and wind-swept like a Group of Seven painting, and the wind rushing through them sounds like the ocean. Sometimes in early morning, when I'm taking the dogs out and it's still pitch black outside, I hear that rushing sound and it seems more like an out-of-control semi truck roaring down on me, and I find myself jumping up the steps and darting back inside as if the truck's fender is on my heels. A silly impression, really, but that sound does tend to scare me just a little. Or "thrill" might be a better word. It makes my nerves jump and suddenly I'm very much awake and alive. A real ocean gives me the same sudden awareness. A feeling of being very small in an immense world.

Walking today, behind the waddling, tongue-hanging-out-with-joy Brio, I could feel the pores in my skin opening up to soak in the sun. The air flung itself against my face, and I was filled with a feeling almost of going back to my childhood. I don't know why it struck me that way, exactly. Maybe the freshness of the air reminded me of being up the canyon. The roar of the wind sounded like a cascading river. Maybe it was just the freedom of it, the clean, refreshing purity of it. The joy of wearing tennis shoes after months of clompy boots. The knowledge that at that precise moment, there was nowhere I needed to go, nothing I had to do, no one I had to be. It was just me, walking in sunshine. Glorious! 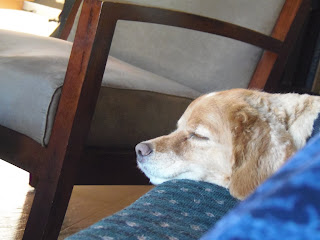 
Posted by Kristen McKendry at 21:57 No comments: