Today I took part in the Toronto Climate Strike (though I took a half a vacation day to go, so I don't suppose it meets the criteria of a strike). We met at Queen's Park for an hour and a half of speeches we couldn't hear very well, though I liked the native drumming and singing. The march itself was very late in starting, and after standing for so long I started getting antsy. And noticed some people were just heading off to march anyway, without waiting for the "Go." I hesitated, and then I saw a placard one person was carrying that said, "Actions not Words," and that was enough to set me off walking.

I have to say, it was a moving experience (no pun intended!). Halfway through the walk, I stopped at the corner of Bay and Dundas and just watched the stream of people going by. I felt like a witness to something amazing. Toronto is truly a microcosm of the world. People of all races and nationalities, all religions and orientations, all ages from babes in arms to white-haired grandparents. A Jewish group blowing the shofar. A collection of "uprooted" people -- refugees to this country. Trans people marching with collared priests and a Tibetan woman in traditional dress, a Sufi mystic, Sikhs, First Nations...everyone was represented. People brought babies, dogs, even a goat. Protest signs in multiple languages.

I was flowing along quite happily, and then I saw a shirtless man walking barefoot down Bay Street, and I suddenly realized I was crying. It's Toronto. It's almost October. He shouldn't be able to do that! Why is it 30 degrees Celsius and I'm thinking I need sunscreen and everyone around me was in shorts and sleeveless shirts? Climate change doubters, I rest my case. This isn't normal!

The signs and slogans I found fascinating in their fervency and variety. They ranged from clever to simple:


But my favourite sign said, "It's so important, even introverts are marching!" I told the woman holding the sign that I had found my people, and she replied, "We're here. We're just invisible."

As we walked, people chanted football-rally type of slogans, though "Climate Justice Now!" seemed a bit vague to me. Then again, I guess it's not so catchy to march to "Lower the voting age to 16" or "Responsible forest management" or "Conspicuous consumption has no place on a finite planet."

I watched this stream of passionate humanity -- green hair, globe-painted faces -- and felt the tears on my cheeks. I haven't stopped to think why. Touching to see such conviction? Love for this crazy, messy, exuberant city? Pride for Canadians who left work and school to participate? Or just sorrow for this achingly beautiful, abused, patient, generous, injured planet? I echo Enoch's cry: "When will the earth rest?" We owe it such a deep apology. The earth trembles. I'm surprised it hasn't shaken us off like fleas long before this.

Climate change is the only issue. If we had social and racial justice, equitable economics, fair distribution of resources, safety, tolerance, and peace, we could more easily address it. But without a planet to stand on, even those weighty matters...won't matter.
Posted by Kristen McKendry at 17:25 No comments:

How About Them Apples?!

Purchased from Warner's Farm in Vineland, Ontario. Spy apples are the best for pies. They're just the right tartness and firmness, and they're so big I had to slice them into 64ths. Warners supply most of my fruit every fall -- I highly recommend them! I put up jars of pie filling yesterday and put the leftover slices into a betty. Yum! 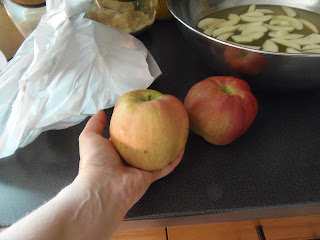 Posted by Kristen McKendry at 07:30 No comments:

Yesterday my Bishop, his wife, my Ministering Sister, and Sons 2 and 3 spent a chunk of their day helping my husband and I load all the cut brush and yard waste into a dump truck to have hauled away. It would have taken us hours if they hadn't come to help. What could have been a terrible chore became a fun event, followed by ice cream. Even the man driving the truck went from groaning at the size of the pile and muttering about having to increase his fee to laughing and joking, when he saw all the helping hands. Not only helping, but cheerful. In what other church would you find your Bishop giving up his one free day to help dig out stumps? If nothing else, Mormons know how to work.

I now have a clear yard, no stumps, half the hedge to have to manage, and lots of space to think about landscaping. Not sure what we'll do in the new empty places, but it needs to be something low maintenance.

Feeling a bit rickety today and spent much of the afternoon on the couch, doing needlepoint and just being kind to myself. Hopefully my body will forgive me by tomorrow!
Posted by Kristen McKendry at 20:38 1 comment:

Yesterday they announced that the campaign is officially underway for our federal election. Campaigning began in earnest today. And we go to the polls on October 21. Whiz bang and we're done in five weeks. That's the way to do it!

My husband says that's because they're running on their track records, not their promises.
Posted by Kristen McKendry at 17:38 No comments:

Joy in the Simple Things

My good friend Sheri (look, I didn't say my old friend Sheri) whom I've known since kindergarten came to visit me for a day while her husband was in town for work. Sheri is one of those delightful people you can just be yourself with and not have to entertain or put your best face on for. We spent the day walking to the library to return a book, going to Michael's to buy yarn, going to Dollarama for "Canadian" treats for her to take home to the family (Wunderbars are lovely), and going to Walmart, where she got McIntosh toffees and some sweaters for her grandsons. We ate chicken shwarma for lunch, and then we took Brio to the park to play ball.

These are all simple activities, but when you do them with someone you enjoy and have known forever, they turn into special events. The simple things in life become sacred when they're done with love.

I must remember that the next time I'm hosing out the recycling bin...
Posted by Kristen McKendry at 05:35 1 comment:

And How I Spent the Next Saturday...

Twenty-one jars of peaches takes just as long to process as sixty-one jars of tomatoes. Who knew? But at least they're done, and now sit golden and glowing like jewels on my shelf. And for the first time I made peach butter (like apple butter only peaches) and it is fabulous! I had an inch in a jar leftover that wouldn't fit in the 4 pints, and I thought, "I need to run buy some bread so I can try this." And I dipped a spoon into the little bit to taste it...and decided not to waste time going for bread. I just ate the thing straight from the jar. My, that was yummy!

While I was slaving at the kitchen sink, my poor husband was out chopping out part of our hedge. Now understand, I don't usually like the idea of eliminating greenery. I'm all about plants. But this hedge has been the bane of our existence for eighteen years. When we first moved in, it ran all the way around both the front and the back yards. It hadn't been properly pruned in many years and was leggy and out of control, and parts of it were about nine feet tall and five feet thick. We did some hard pruning at the beginning and got it down to a manageable size. And then when we put in the backyard fence we chopped some of it out and cut some of it to three feet high.

But even that reasonable height still meant an awful lot of pruning, and we've literally worn out three industrial electric trimmers. We bought another, but both of us find it too heavy to manage, and we've finally reached the stage where we're willing to admit defeat. We looked into a professional service to come trim it for us, but they want about $800 and they'd have to come three times a summer. Whew!

So we took the bull by the horns and my husband has chopped out about 150 feet of it (don't worry, there's still plenty left along two other sides of the yard). We've hired our burly sons to come dig out the roots for us. So after I finished seven hours of peaches, I went out to help haul the cut brush into a huge pile in the backyard until we can get someone with a truck or bin to haul it away for us. I imagine every rabbit in the neighbourhood perking up and shouting gleefully, "They're building us a condo!" We'll have to get it moved out before they move in.

We have had interesting reactions from people in the neighbourhood. Who knew how many people were aware of or emotionally attached to our hedge? Who knew how many others feel they have a stake or say in our landscaping? As my husband was out wrestling the thing into submission, every person walking or driving by had comments. Some acknowledged that forty years of one hedge is enough and it was time for something new. Some felt we were being reasonable when my husband explained it was either get the thing under control or sell the house. Some empathized with the whole getting-older-and-slower thing. And some felt it was too drastic and were horrified. To which I felt like responding, "Fine! We'll keep it. What time shall we expect you over to trim it for us?"

I still have plenty of hedge left for the birds and other critters to populate, never fear, and now I have a blank slate and must decide what to put in the hedge's place. It's surprising how much space it took up. The yard feels huge now. What to do? A tidy border of hostas or something to delineate boundaries? Cover it with gravel and not try to enclose it at all? How about I put up a 150-foot bench on which my neighbours can sit and contemplate the universe?

My body hates me this morning, but we got a lot done yesterday, I have to say. No one can say we don't know how to work. But I am looking forward to spending Labour Day NOT labouring. Definitely time to curl up with a good book and not move for a while.
Posted by Kristen McKendry at 05:53 No comments: