So my church group is having a Cultural Night, where people from the congregation set up educational booths with displays, food, and flags from their culture or country and share their backgrounds with each other. These are always fun events, because our group includes people from probably about twenty countries, from China and Peru to Angola and Poland. The food is always amazing, the talents are beautiful, and it's a great social night.

However, I always run into the same quandary whenever we do these sorts of things. I had the same problem in school when they said, "Bring a traditional food to class." My family has been in the States for centuries, and in Utah since 1847. What's my native costume? Blue jeans? And what would my native food be, Jell-O? Funeral potatoes? Somehow that pales beside the colourful garb of Africa or the spicy curried goat my friends will be bringing.

I suppose I could hark back to my distant ancestors and come wearing a kilt, but that isn't really my culture handed down through my family. It's one I have adopted as part of being a piper. I could put up a Welsh flag and sing Welsh folk songs to people, but I learned the language in university---my family technically hasn't spoken Welsh since the early 1800s. I may as well wear animal skins and put up a booth demonstrating fire-starting with flint, because at some point my ancestors likely did that too.

Well, I suppose I know a lot of Mormon pioneer folk songs. I could bake sourdough and serve it with home-preserved crabapple jelly. I could try to find a Utah State flag somewhere and set out a display of silk worm cocoons. And I could wear the traditional clothing of Utah: maternity clothes.


Where I lived then: 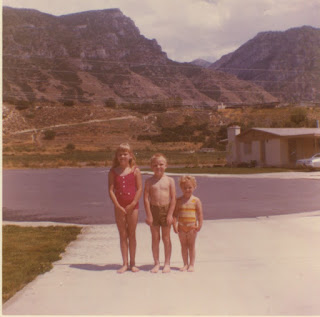 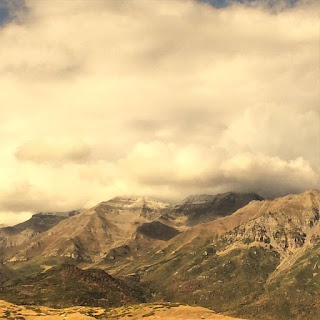 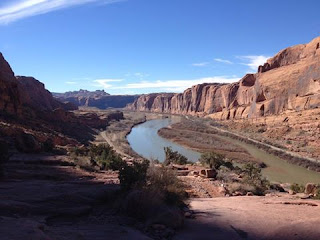 Where I live now: 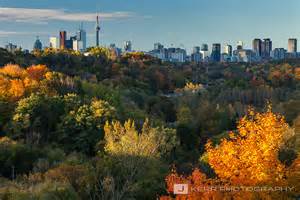 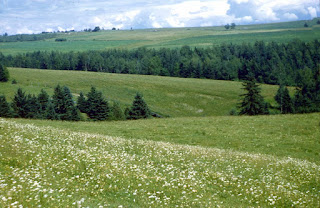 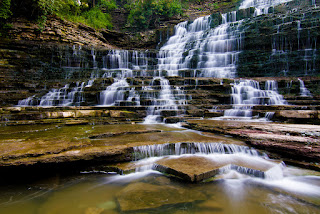 Pictures courtesy my family and the Internet
Posted by Kristen McKendry at 07:01 No comments:

Back in December my granddaughter had a fundraising thing at her nursery school. I didn't want to just ask my coworkers to donate, because that's always awkward for me, so I threw in a little extra something: I would take the stairs at work for one day for every dollar donated. My office is on the 5th floor, and I have to deal with people on several other floors throughout the day, so it wasn't an idle offer. Well, my coworkers donated $102, so that meant I'd be avoiding elevators for several months!

I made myself a chart with 102 boxes to tick off, so I could keep track. It's incredible how hard that slog up the stairs is at 6:45 in the morning, especially wearing boots, coat, and backpack. And I especially hate payday, when I have to go down to the first floor to pick up pay stubs for staff and the trudge up again. I started avoiding going out for lunch for the same reason (thus saving money). But little by little I've noticed the climb is getting easier.

The other day I had a bad cold and aching hip and told myself I'd be nice to myself, take the elevator, and not count this as one of the 102 days. So I took the elevator up when I arrived...feeling guilty...hoping no one would see me emerge from it on the fifth floor...had my excuses ready... But later that day I realized I'd been taking the stairs all morning anyway, running files to people. I'd just automatically headed for the stairwell. I'd wasted my opportunity to pamper myself!

Just goes to show you how habits are formed. I don't even think about taking the stairs anymore. I suspect I'll keep using them even after the 102nd box is ticked off.
Posted by Kristen McKendry at 07:49 No comments:

Gretel Ehrlich and My Grandmothers

I just read in The Solace of Open Spaces, by Gretel Ehrlich, this observation: "We live in a culture that has lost its memory. Very little in the specific shapes and traditions of our grandparents' pasts instructs us how to live today, or tells us who we are or what demands will be made on us as members of society."

It gave me a jolt to read that. I suppose that may be true for some, but I find it very sad, and I don't think it's true for me at all. My ancestors are very much alive in my day-to-day life, in how I prepare food and how I practise my religion, how I dress and how I conduct my family routine, how I speak with God, how I interact with other women, and even what I read and write. The skills that were passed down to me, the music, the form of prayer, the role I play in my circle of women, the service I give---all of it comes from my Mormon ancestors. It isn't just a "Sunday" religion, it infiltrates and forms every aspect of my life. I can't divorce who I am from that background. I think the same would be true for many Jews, Amish, and others where their current culture has been preserved and passed down through their families for generations. Because of the traditions of my grandmothers and grandfathers and the framework they provided, I know who I am and understand my relationship to the rest of the world. On days when I am bogged down with care or swamped at work, I can stop and breathe deeply and remember the identity my family ingrained in me and remind myself that I am more than this. It gives me a perspective and a peace that wouldn't be possible otherwise.

I can't imagine being rootless or set adrift in today's world without that grounding. That shelter. I feel so very sorry for Gretel, who must feel unanchored to have written such a thing. I am grateful to my ancestors who sacrificed to ensure I could live with this beauty.
Posted by Kristen McKendry at 16:54 1 comment:

My granddaughter came downstairs this morning having dressed herself. She'd selected a nice tartan dress, and she wore a pair of pink fairy wings on her shoulder blades. She danced about the living room cheerfully calling out, "Quack!' at each jump.

Not much in a three-year-old's life makes sense, really.

I'd just read Gary Snyder's comment in The Practice of the Wild where he says: "...there is no guarantee that any school anywhere in the whole world can give a child an education which will be of practical use in twenty years. So much is changing so fast...It seems as though everything except mathematics and linguistics - and myth - will become obsolete."

I do think schools are trying to teach our children helpful things like cooperation and group problem-solving. But I think they're still very entrenched in a "do it this way and this way only" mentality. My son got in trouble in his math class once because he was solving problems using a different approach than the formula his teacher wanted him to use. His answers were still correct, note, and personally I think his method was smart and useful and applicable across more scenarios. It involved more thinking and more understanding of the underlying principles. But no, he had to re-do his work using the teacher's tried-and-prescribed formula, which wasn't as elegant and which didn't explain to the students what was really happening behind the scenes. It was just "plug in the numbers to this formula" and don't try to understand why.

I think the one thing that our children will need to survive in this ever-changing environment and crumbling world is creativity. They need to be able to think up new solutions to both old and new problems. They need to be able to trust their imaginations and break free from the old way of thinking (which produced the problems in the first place). And they will need myth - a sense of possibility, of story, of rootedness, of there being some overarching thing connecting them to each other and to something larger than themselves.

Maybe fairy wings is an okay place to start.
Posted by Kristen McKendry at 07:20 No comments:

...Yes indeed, we got a snow storm. Took me three hours to get to work yesterday. I should have kept my mouth shut.

Posted by Kristen McKendry at 07:28 No comments:

I Saw a Robin

Okay, this is really weird. Either it hasn't gotten cold enough yet for the robins to leave, or they're a month and a half early coming back. I track on the calendar every year the sighting of the first robin, as the herald of spring. When I saw the little guy at the park while I was walking the dog, I couldn't believe it. Was he lost? Left behind in the stampede south? And then I heard another one singing. Yep, sure enough, the robins are here.

We've only shoveled the snow twice this year, and it's hardly gotten below freezing for more than a few days. There are buds on the magnolias, and someone at work reported their tulips are actually blooming. I'm not starting my seedlings yet, though. I'm piling more mulch on the garlic and hoping they don't raise their heads quite yet. There's got to be another winter storm somewhere ahead of us. We can't get off this lightly!

Posted by Kristen McKendry at 07:50 No comments: