When XBox isn't Around, Life Happens!

I had a bizarre experience today. I was upstairs working on my computer. My fourteen-year-old son and his friend were moping in the living room because they couldn't access the XBox. It's in the basement bedroom, where my 21-year-old son was in bed with a migraine. What? An entire day to fill without video games? Impossible!

I shouted down some suggestions for activities (go to the park, play frisbee, go swimming, walk the dog, mow the lawn), which were roundly declined. There was just nothing to do! What's more, they were hungry and there was nothing in the house to eat! Frustrated, I told them to cook something.

And to my surprise, they bounced up off the couch, got out the cookbook, and started looking through it. And found the cakes and frostings section.

"Mom, we are so going to kill your kitchen," my son declared, and they were out the door to the store to buy ingredients.

For the next hour and a half, I listened to them downstairs, giggling hysterically, using the electric mixer, banging cupboard doors. Voices, laughter, happy sounds. I tried to peek in on them once but was quickly shooed away. "Don't look! It's a surprise!"  Whatever they were up to, it smelled good.

At last I was told I could come downstairs "with eyes closed" - a dangerous thing in our house - and there on the counter, with candle merrily burning in the centre, was a wild and beautiful crazy creation. A white cake at the bottom, soaked in frosting, topped with chopped Boston Cream doughnuts and chocolate swirls. In frosting was written in the centre "Dub Step Forever." They took a jillion photos of it with camera and phone.

It was super sweet, probably a million calories, and glorious. If you had told me two teenage boys could get such glee out of baking a cake, I would have scoffed. It's terrific what creativity and old-fashioned fun - and pride - can spontaneously erupt when the XBox is turned off.
Posted by Kristen McKendry at 19:44 1 comment:

The light has changed
from summer to fall,
the golden haze of humidity gone.
All around me is renewed
in cool sharp-edged clarity.

So too I perceive differently,
with clear eyes and fresh heart.
Transfused with vigor, hope, peace,
I'm warmed by the grace
that grants this new season.
Posted by Kristen McKendry at 07:19 No comments:

I was sitting at the table on the patio, reading, and looked up to see a flash of movement among the sunflowers. It took me a while to discern the American Goldfinch - he was the exact same black and pale gold as the sunflowers. He hung upside down over a drooping flowerhead, picking at the tiny black seeds within. It was like watching a flower itself, in motion.

Was he created to camouflage with his food source? Is he attracted to the seeds because of the flowers' familiar colours? Does a goldfinch see his own colours as welcoming? What did he eat before I planted those particular flowers this year?

I go back to my reading, he goes on with his feeding, and peace infuses the morning. I am happy he thinks my backyard is a friendly place.


Posted by Kristen McKendry at 09:34 No comments:

At a family reunion, a number of us went to an outdoor theatre to see a play. We had some time to wait before it started, so my mother turned to my cousin and challenged her to a purse duel.

The basic idea of a duel is to see who has the most bizarre stuff in her purse. My cousin won. Her purse contained a stuffed monkey, a travel Boggle game, and a container of peach cobbler.

Remember the old "Let's Make a Deal" game show? Under the influence of Bob Barker's smile, women cheerfully bared their purses to nationwide audiences without a flinch. And they carried the oddest things! Screwdrivers, cans of whipped cream, road maps of Istanbul, Ace bandages. We all watched breathlessly, wondering what amazing item would be produced next.

I figured Bob Barker wouldn't find my own purse very interesting, until recently when I took a good look for myself. I had some ordinary stuff - Advil, my day planner, my wallet, three pens, a notebook full of cryptic notes I can no longer make sense of, and six old bus transfers. But digging deeper, I found an empty Tupperware salt shaker, my snow hat, a pair of sandals, an overdue library book, a baby pacifier (the "baby" is about to start high school), a dry-cleaning stub so I can retrieve the dress I took there three months ago, a hair scrunchie (I haven't had long hair in years), a Pokemon card, a packet of Velcro, and a Chess piece. Just let me chuck in a fire extinguisher, a hammer drill, and a can of shoe polish, and I'll be ready to take on any challenger.

Except my cousin. I don't think I can top peach cobbler.
Posted by Kristen McKendry at 20:47 No comments: 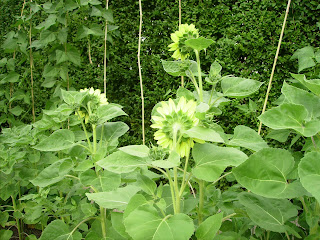 My parents spent eighteen months in Hungary and sent us beautiful photos of the sunflower fields there. I thought I'd grow a big bed of these cheerful flowers in the garden this year. But my planning was faulty---all the flowers face the rising sun in the East, toward the hedge at the back of the bed. They all have their backs turned toward us. I feel rather snubbed.
Posted by Kristen McKendry at 06:35 No comments:

Gardening with a Machete

A friend in Alberta is selling his house in Ontario, and he asked us to tidy up the yard before prospective buyers came by. The last tenants cleared out a couple of weeks ago, and it's obvious to me they hadn't mown the lawn or weeded the yard in weeks, or maybe even months. The thistles and ragweed were five feet tall, and the grass came to our knees.

His mower was broken, so we walked ours down the road, hauling a hundred and fifty feet of extension cord with us. It wasn't quite long enough. We couldn't water the grass as instructed, because the handle was broken off the spigot. The vacating tenants had left their garbage in the shed, in 100-degree heat. The friendly but non-English-speaking neighbour couldn't quite tell me what day was garbage pick-up day. But he had a nice smile.

We managed to mow most of the lawn, struggling up the 45-degree hill in the backyard, but eventually the thistles and heat defeated us and we retreated, to return to fight another day. But the little dent we did make revealed a rather nice, long yard, some decent trees, a patch that would make a sunny vegetable garden. The dip at the bottom of the hill would make a snazzy pond, and if you terraced the hill itself, you could make quite a stunning landscape. Even my thirteen-year-old was wandering around saying things like, "They need a brick path here" and "You could plant some neat bushes here..."  It was like walking around a blank canvas, the possibilities tantalizing.

Not that I need to take on any more yards. Mine is more than I can stay on top of already. But wouldn't it be a fun job to work for a real estate company cleaning up and "staging" yards for prospective home sellers? A touch of colour, a pot of flowers by the doorstep, a little shave and a haircut here and there, and the space is transformed. Maybe that will be my next career.
Posted by Kristen McKendry at 12:19 No comments: