Musings on Penguins and Thomas Edison

I watched a documentary on penguins that noted something I hadn't known before. Every so often, you get one penguin that heads off into the hills away from the sea. It can't be diverted back to its safe place. If you return it home, it heads out again, trudging determinedly along away from the rest of the flock. It means certain death for the penguin.

But maybe it was programmed with that adventurous, suicidal spirit - it's by leaving the flock that it runs the chance of discovering new territory, new feeding grounds, and spreading the genes for the whole group. Otherwise, how would penguins extend themselves? New infusions are needed every so often, and if one adventurous penguin makes that discovery, it benefits the whole flock. Even if it means many die in the attempt.

I think humans are sort of the same. Every so often, the population produces an explorer, a free spirit who takes off alone. He or she may find a new habitat or food source or technology for the whole group. Someone had to be the first to head north into Europe from Africa. Someone had to decide to move with the changing ice shields or to dig in the earth instead of following migrating animal herds. Someone had to take that first flight, that first step into space. Someone had to discover that snails are edible (I dread to think what extremes drove them to that discovery).

The explorers among us aren't always recognized as such during their lifetimes. Sometimes we just see them as mentally ill or social misfits, recluses or absent-minded professors. Sometimes we categorize and label people without looking beyond the obvious to what their potential contribution may be. Van Gogh would have been written off as just another nutcase if it hadn't been for his persistent sister-in-law who recognized his genius and promoted his work after his death. So yes, the world needs explorers who step to their own drummers - but it also needs sensitive observers who look deeper, below the surface, and value what the explorers have to offer.

Posted by Kristen McKendry at 18:55 No comments:

The Significance of Trees

I keep a notebook which I carry around with me everywhere, and when something strikes my fancy or tweaks my interest, I write it down. From this I pull ideas which later become plots and books. I was thumbing through an old notebook today and came across some scribbles I wrote down a long time ago.

I was struck at the time with how often trees are used in analogy and allegory, in symbolism and scripture. These are some of the notes I made:

I sit looking at this list I scrawled years ago, and I don't know what to do with it. A scholarly article? A poem? It seems some sort of tribute to trees is necessary. There is an empty corner of my garden that could use a tree, something colourful, like a flowering almond. Maybe in the spring I will plant one. My garden is a place of comfort, of abundance, of generosity. It feeds and soothes me. It's as close to a sacred place as I can imagine, and as such, I think it needs a tree.

Posted by Kristen McKendry at 18:28 No comments:

All dressed up and nowhere to go

So son number two found out from son number one that the temperature was -56 yesterday in Manitoba, and he's rethinking his plans. Maybe he'll go visit for a week or two in the summer and just find a fulltime job here in Mississauga. And stay in my basement.

I'm having a weird reaction to that decision. I didn't want him to go initially. But I got my head around it, accepted the inevitable, and braced myself for him to leave home. I even started letting myself envision what life would be like without him here. And now he's not going. And I can't decide if I'm pleased or irritated.

A friend of mine struggled for a long time with cancer and eventually it looked like she was going to lose the battle. She got her affairs in order. Her family braced themselves, reluctantly accepted, understood. And then my friend got better. The cancer was conquered. And she went into a depression, and her daughter (with whom she is very close) also became depressed and lost her way for a while. Even when we don't like where things are going, once we accept and prepare for them to go that way, it's a bit of a shock when things don't go that way after all. We are thrown off balance. Maybe in a small way, that is what I am experiencing. I've never been good at switching horses mid-stream.

Of course I'm happy he's staying. I feel a sense of relief that I can keep him a while longer. But I know it's inevitable - one day I will have to let go of him. And then I'll have to get my head around it yet again. I'd rather only have to do that once.

Posted by Kristen McKendry at 08:29 No comments:

When a child leaves home

Somehow we always think we will have more time than we do. I know that's cliche but it's true. Even though you know right from the beginning that your job is to get the kids out on their own as responsible adults, even though you know right from the start that your purpose as a mother is to make yourself superfluous, it is still a weird thing when your child actually does launch.

I had the odd experience of raising teenagers before I raised small children. Watching them progress was fun and heartbreaking and educational. Seeing our former foster son now married and paying a mortgage and working as an emergency room nurse feels great, and right. That's how it's supposed to go, I tell myself. All is working out as it ought to.

And then my own oldest son left home. With about a week's notice. To move to the sub-Arctic of Manitoba. Permanently joining someone else's family and forming a family of his own. Wait a minute! Hold it! That's not how it's supposed to go! You're supposed to marry and have a family, yes, but you're supposed to end up living right around the corner so I can babysit and have you over for Sunday dinners. What do you mean I'm not allowed to decide where you live?

Of course I get myself in hand and step back and let him make those adult decisions for himself, because he is, after all, an adult now. And I tell myself it's fine, it's how it's supposed to go. He's launched. I am proud of him. But like the tubes of oil paints and rows of tiny Warhammer figures he left behind in our basement, I have been left behind too. And it feels weird. Who will make sure he eats right? Who will fetch Popsicles and thermometers when he's sick? Well, obviously he will do that himself, the same as I do for myself. But I wasn't ready to let go of that yet. I still want to sing him to sleep. But he's doing that for his own daughter now.

Now son number two has announced he's joining son number one in Manitoba to work. He'll go for the summer, and if it all works out well, he'll stay. Permanently, or at least as permanently as anything can be predicted to be in this life. And now I'll be facing yet another empty bedroom, and one less person at the table for dinner. It will be very quiet when he goes (which is silly for me to say when the three remaining people in the house are all bagpipers, but it WILL be quiet!). I know this is an age-appropriate and reasonable step for him to take. And again I'm proud of him and sure he'll do great. But somehow I didn't expect him to slip through my fingers quite yet.

I went to son number three the other day and hugged him tight and told him not to grow up, not yet. I need him at home for a while longer. He smiled and promised to hang around for a while...but he's fourteen, and it won't be that long before he launches into the world too. And I'll be proud of him too, and happy. And sad. And then I'll probably lose my mind, sell the house, buy a Winnebago, and launch myself.
Posted by Kristen McKendry at 09:02 1 comment:

Rashmi where are you?

Okay, so I'm a Luddite and do not understand technology at all. I can push the button I'm told to push, but that's about all. So my new friend Rashmi is out there somewhere leaving me comments on my blog and I can't figure out how to reply back other than leaving a comment on my own blog. How stupid is that? So Rashmi, if you're out there, please send me your email address! I'd love to stay in touch. You can contact me through my website kristenmckendry.webs.com. Thanks!  For those who haven't met Rashmi, she's an exciting new writer entering the scene in Mississauga and a super nice person.
Posted by Kristen McKendry at 08:42 1 comment:

All Quiet on the Home Front 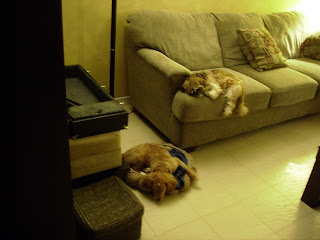 Hanging out at home, all is peaceful, and absolutely nothing to report!
Posted by Kristen McKendry at 11:34 1 comment: