Starting some more tea towels. It's been nice having a hobby I can do when the weather doesn't permit gardening. There's a meditative element to weaving that I like, though I'm not very adept at it yet. And I like the fact that the whole process is electricity-free. 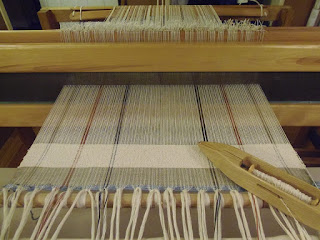 Posted by Kristen McKendry at 04:59 No comments:

In my book Desperate Measures, I referred to the massacre of the Black Donnellys in 1880. Today I happened to be in Lucan for a wedding and went walking in the cemetery beside the church. And found the Donnelly family's headstone. (This is the more recent one. The older one was vandalized and removed years ago.) I hadn't realized they'd also recently lost two sons, prior to the massacre. There were little offerings people have left on the stone---pencils, coins, a weathered doll.

I found Lucan a lovely place, but with a soft sort of melancholy about it. If I hadn't known the story of this family, maybe I wouldn't have felt that. I sat for a while on a bench under a tree in the cemetery and knitted and soaked in the peacefulness of the place. Rolling green fields. Beautiful stone and Victorian houses. A light breeze. Perfect sunlight. And the distant howling of dogs as my husband warmed up his bagpipes outside the church. 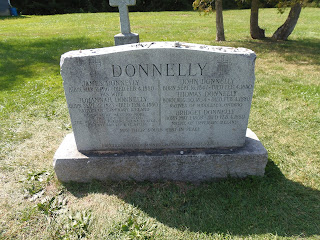 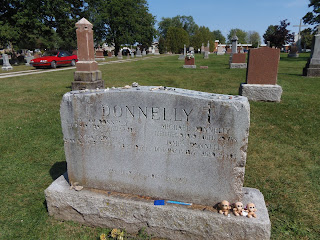 Posted by Kristen McKendry at 22:00 No comments:

That was a fun afternoon! The eclipse itself was interesting -- the dimming of the sunlight's intensity, the noticeable drop in the temperature -- and to my surprise, the social aspect of it was just as fun. There weren't enough glasses for everyone, so we shared ours with seven other people, all of them from other countries. It was great to get to meet some neighbours, and it was encouraging to see a traffic jam caused by science lovers. We parked far away and walked into the park to avoid the worst of the crush. People were sprawled out with blankets and bags of chips, and everywhere people were chatting and sharing. Such a nice thing to experience. A reminder that we're all just tiny lives, sharing a tiny speck in space together, so we need to get along.
Posted by Kristen McKendry at 18:49 No comments:

Balm for the Soul

There's so much out there on the internet right now about hate and counter-hate. I've tried to stay out of it, avoiding some of the more heated discussions, but it's still there at the periphery of everything, and it's pretty disheartening. So imagine how soothing it was when I went onto Facebook this morning and found a video someone had shared of "rush hour" in North Yorkshire --- a herd of sheep trotting happily through main street as they were moved from one pasture to another. People turned out to watch as if it were a parade. Now and then a ewe would give a little skip as if she were an excited schoolgirl on her way to a picnic. I could feel the serenity of it, and a little sigh in my head that said, "Simple joys." Made my day.
Posted by Kristen McKendry at 05:12 No comments:

In 1810 this ad appeared in the newspaper:

"A young man, who wishes to retire from the world and live as a hermit in some convenient spot in England is willing to engage with any nobleman or gentleman who may be desirous of having one. Any letter directed to S. Laurence (post paid), to be left at Mr. Ottons, no. 6 Coleman Lane, Plymouth, mentioning what gratuity will be given, and all other particulars, will be duly attended." [quoted in A Pelican in the Wilderness, Isabel Colegate,  p. 187]

That's it! The career I've been searching for! Completely suited to my temperament. All I need to do is find a patron willing to put me up in a cottage at the bottom of the garden and pay for my upkeep. In return, I will wander among the flowerbeds, recite pleasant poetry for visitors, and look generally picturesque.


Posted by Kristen McKendry at 20:44 No comments:

A Walk on the Wild Side

I stepped outside my door this morning and within fifty feet of the house I had encountered a skunk, three rabbits, and a cat (who was obviously not doing his job regarding the rabbits). Needless to say, I sang all the rest of the way to the bus terminal, to alert any other skunks that I was coming. Now that it's dark in the mornings, skunk encounters are more likely.


I like it when wild animals find my yard a friendly place. I love that birds love my fountain and hedges. I like watching the raccoon in the maple tree watch me (and I haven't seen any evidence that he's getting into the garden or composters). And, now that I think of it, it's also kind of cool that domesticated animals seem happy here too. It's nice to think that Brio likes my company, that when he has the choice of many places to be, he prefers lying with his head in my lap. There's something cozy and also flattering about that.
Posted by Kristen McKendry at 07:17 No comments:

Autumn is on its way and I'm not ready for it

The maples are starting to turn crimson and the spaghetti squash is yellowing. I can almost, but not quite, feel that crisp cool in the air that signals fall. I've spent the last two evenings cleaning kale seeds I've harvested from the garden. (Those babies can really shoot across the room -- they explode like mini torpedoes). Unfortunately I wasn't quick enough to get out there before they started popping all over the garden, so next spring will be kale city. I can think of worse things.

The stores already have Halloween decorations up, and the back-to-school ads are playing. There's a mad scramble to get things done before winter. I'm not bottling as much as I wanted to, and I'm thinking I'll just rent a rototiller this year to speed up the putting-the-garden-to-bed routine. I'm using the chop-and-drop method in regard to weeds. And I'm not going to plant the fall crop of lettuce and spinach. As I recall, it didn't do much last year before frost hit.

I am back at work after 3 weeks away, and it's like jumping into the deep end of the pool with lead shoes on. I know at some point I'll come back up for air. When I do, it will probably be snowing.
Posted by Kristen McKendry at 05:10 No comments:

I forgot to mention! The Song of Copper Creek was #10 on the bestseller list at Deseret Book when I went for the signing on July 29. That feels great! A good turnout for the signings. It's always fun to meet new people who stop to chat about my books. And thanks, as always, to my family for their great support!
Posted by Kristen McKendry at 06:29 No comments:

I'm back, emerging from 95-degree (Fahrenheit) dry heat in Utah into cool, windy, rainy weather in Toronto. That sudden change, and the abrupt move from one side of the country to another in only 4 hours, is a bit disorienting. I used to have to switch planes in Chicago or somewhere, so the travel was longer and gradual, but now it's a non-stop flight to Salt Lake City. (Which is marvelous, don't get me wrong. But it makes the two cities seem closer together, which feels weird. I mean, I can get to Tobermory or Prescott in four hours too, and those are in Ontario.) The garden is overrun with weeds,  and my husband has harvested a bunch of zucchini all lined up on the counter, even though when I left there were only blossoms. I've missed the blackberry harvest, which was apparently spectacular. I'm hopefully in time for peaches and pears.

Anyway, it was a wonderful trip. Lots of family, food, friends, and fun. Long walks. Great classes on BYU-Idaho's beautiful campus. Board games. Knitting marathons. Mochi ice cream. Reconnecting with people I hadn't seen in ages. The thrill of not being the lone alto at church. Stunning Provo City Center Temple. A Hungarian wedding reception complete with dancing and whip demonstrations. The fun of hearing my parents' disembodied voices coming out of the yew hedge (pruning session. Long story). The bizarreness of having total strangers jogging past on the street greet me with "good morning" -- even the teenagers. Watching a big bearded man on a Harley lead the children's Primary parade. And two nights in lovely Park City watching movies and contending with cantankerous electrical outages. In short, a really great trip!

I am not going to think about returning to my cubicle on Tuesday. I'm going to spend the long weekend weeding the yard and stringing my loom and clinging to the joyful feeling of having been home.
Posted by Kristen McKendry at 06:21 No comments: