Happy Father's Day to the Men in My Life

I had the greatest dad growing up. All morning my thoughts have been filled with great memories of him:
Now Dad is in England with Mom, serving the Lord on a one-year mission. This is their second mission, the first being in Hungary, and I am continually impressed with their adaptability, humility, and willingness to serve. And not many people would try to tackle learning Hungarian in their 70s! Dad is the type of person who is always curious about the world and eager to learn new things.

When I married I purposely looked for a husband who was a lot like my dad. I wanted someone who could use both his hands and his head, who valued education, someone patient and gentle and devout. And I found such a person. And made him go be interviewed by my dad before I'd agree to marry him. They both survived the event, which told me I was on the right track.

Now I see my son raising his little girl, and I see the same sweetness and gentleness, the same willingness to work hard and do whatever it takes to care for the child entrusted to him. She is building her own memories of her dad, and I believe they will be as treasured as mine. 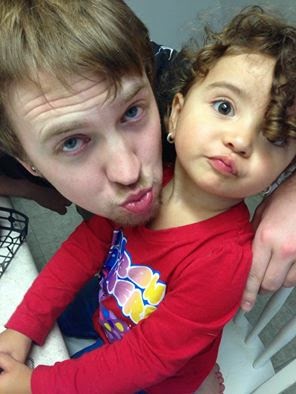 Posted by Kristen McKendry at 07:30