The End of an Era

Thirty-five years ago, I began playing the bagpipes. It wasn't the easiest challenge I've ever undertaken, but it was enjoyable and brought me a lot of adventure, happiness, and friendship over the years. I worked hard to get them. I've played our clan tune on the hillside overlooking my ancestral home in Scotland. I've played in a Welsh pub. I was the first female piper in the history of the Argyll and Sutherland Highlanders regiment. I've trudged around Highland Games hauling twenty pounds of kilt and equipment for the last thirty-five summers. I've learned from Ian MacDonald and Michael Grey and Bob Worrall, legends in the piping world. I've played with the Toronto Police and, more recently, St. Andrews Pipes and Drums. But the most important thing bagpipes have done for me is to lead me to my husband, at band practice, thirty-one years ago. (I confess I also like watching the reactions when I tell people I play this unique instrument. Everything from fascination to horror.)

I am no longer able to play because of health issues and busy-ness and - let's face it - general exhaustion, and I quit the band a couple of years ago. And this week, as a final admission that I'll not be taking it up again, I sold my pipes to another female student in the band. They're good for her, the right size and weight, and I hope she gets many years of joy out of them. It feels weird letting them go, but also right. A new generation of players is moving up the ranks, and that's how it should be. And I admit a small part of me is gleeful that I no longer have to struggle with 8 yards of wool in a Port-a-Potty at the Games. 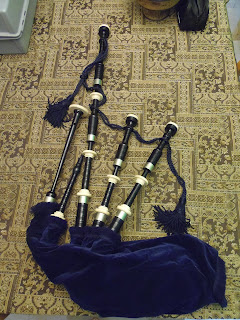 Posted by Kristen McKendry at 18:01