Small Miracles...(Maybe not so small)

Tonight I was supposed to rush home from work, meet up with a friend, and hurry up to the temple in Brampton to get there for 7:00. As I was coming home, I kept watching the sky, because the news said we were in for snow. The sky kept getting darker and darker, great towering big clouds with the sun shining behind them like something off a Mormon Tabernacle Choir album cover. Beautiful but a bit frightening. You could see hazy sheets falling beneath them as the snow approached.

Now I am not great at night driving, and I'm terrified of driving in icy or snowy conditions. I didn't want to bow out of the planned trip, but on the other hand, I didn't want to be responsible for smashing the car and killing my friend, either. So I flung some pretty desperate prayers skyward asking that the snow hold off until I got home from the temple, around 9:00 p.m. If I was meant to go do this work at the temple, I'd do my part, but I wanted God to do His and keep the weather at bay until we got back home.

When I switched buses at the mall, the sky was right out of a thriller, dark and menacing and promising an amazing storm. Fine snow was beginning to flurry and swirl in the icy air. The storm was arriving. When I got off the second bus at home not five minutes later, the clouds were moving off toward the lake, the blue sky was coming out, the sun was dazzling...and there was absolutely no snow. It was beautiful as a spring day. I watched the sunset in a perfectly clear sky. 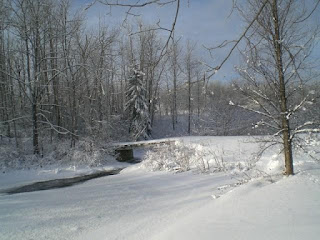 Posted by Kristen McKendry at 21:35