Up Close and Personal

Five o'clock this morning, I was walking down to the bus in the semi-dark and heard clicking steps to my right. I turned my head and saw an animal trotting across the street right toward me. My first thought was that someone's dog had gotten loose...and then I saw the fur, the long tail, the height, the glint of silver and rust, and realized it was a coyote. He was much bigger than I'd expected, more the size and heaviness of a wolf. Not at all lean or rangy as one is led to believe. I would have thought him a wolf, in fact, except he was on his own, and I've heard there are coyotes in the neighbourhood.


Would he attack? You hear stories...Would my backpack provide any protection? It's a testament to how much the human brain is trained to be attracted to dog-shaped things that my first instinct was to call out, "Here, boy!" But I caught myself in time. I didn't break stride and kept walking briskly, trying not to look appetizing. But he kept going, crossing the sidewalk about ten feet behind me (by unspoken agreement, we didn't look at each other, on the well-known premise that without eye contact, you can't see me) and carried on trotting down the grassy slope behind a row of townhouses. Clearly he had other priorities this morning than pudgy me.


When I saw he had no interest in me, I paused to watch him swiftly disappear into the dark at the base of an apartment building. While you sleep, do you have any idea what's running by your window? A word to the wise: don't let your cat out at night.


Where does he spend the day, that we don't see him? Should I carry a stick tomorrow morning? What earthly good would that do against something that fast and muscular? I think---though it sounds odd to say it---it would be an honour to be eaten by something that amazing. I can think of worse ways to go.


I continued on to the bus, heart pounding, and an overwhelming feeling of awe and gratitude that I could have met (from a short distance!) such a beautiful creature. I suppose he didn't regard me as anything more than a blip on his radar, but he changed my whole morning.


p.s. When I got to the office, I looked up descriptions on line, and I think what I saw may have been a crossbreed of some sort. Way too big and heavy to be a pure coyote. The closest picture I could find to what I saw (swiped from Internet) was a coywolf. 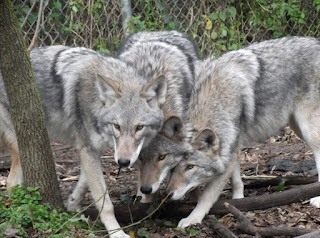 Posted by Kristen McKendry at 06:52