We had been planning a quick weekend trip to Quebec to see a yurt for sale (long story), but with freezing rain and snow in the forecast, coming from the west, we decided to just do a day trip heading east. It didn't sound like the type of weather we wanted to get stuck in on a small sideroad in unfamiliar territory. We had no real plans about where to go, but figured we'd just see where we ended up. We drove through Peterborough to Burleigh Falls (photos below), which was lovely, and then up to Bancroft. There we had the best halibut fish and chips I've ever tasted, in a cute little shop run by a Nova Scotian, overlooking a pond. The white vinegar for the chips was served in a little plastic spray bottle, and we wondered whether the staff clearing the tables used it to also wash the windows while they were at it.

It was too cold to walk around much, and all the autumn colours were gone gray. So we turned around and came home again (with a little detour to replace the windshield wiper that went flying in the rain shower while we were on the highway - held it together with a twist tie until we could get to a city). About nine hours in the car, but it was a relaxing and beautiful drive. We live in such a pretty province! 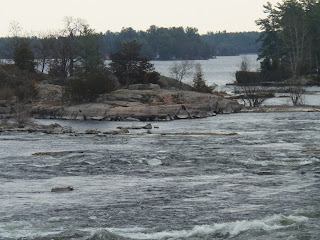 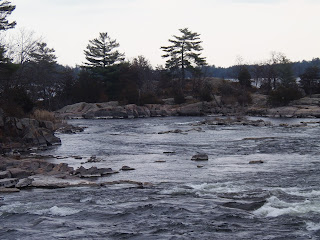 Posted by Kristen McKendry at 19:00