Son Number Three (who is in chef school) has gone to spend the day at Son Number One's house (a decadent few hours of Magic cards, Warhammer, video games, and apparently homemade French onion soup). While he's away, my husband has blitzed his basement bedroom, cleared a corner, and installed a fridge and cupboard and a really cool oven, to give Son #3 his own kitchenette. The oven is one we have had tucked away in storage for years and Son Number Three hasn't seen it in action. It's an old double oven from a restaurant, and the oven doors rotate upward instead of opening downward like usual doors. The four burners are in a pull-out drawer that you can slide in and out to keep hot burners away from small children. Super unique. At some point we'll also install a movable island---likely from Ikea---which Son can take with him when he gets his own place someday.

The plan is to get him a nice futon couch and redo things in adult colours (he likes black, white, and red). Voila -- the gloomy basement will become a snazzy bachelor pad. 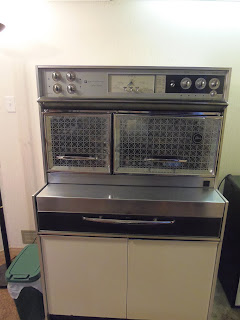 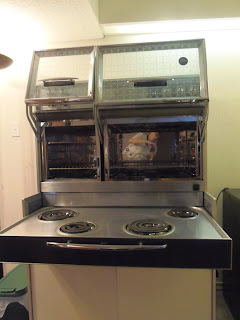 Posted by Kristen McKendry at 17:47