About three years ago, we had trouble with the cable box up the street, so Rogers rigged up a temporary line for us from a different box around the corner. They had to string it half a block, through the trees, across the back yard, across the back door, and around to the side of the house. It worked fine, but when -- months later -- they got around to fixing it and putting in the permanent cable, we once more experienced problems because of that original box. A few visits and a new modem later, all was fine.

The next summer, the city came through to fix the water mains, removing a chunk of our hedge and inadvertently cutting the Rogers cable. Back to the temporary line through the tree tops. We had it all winter, through hail and high winds, and Rogers finally installed the permanent cable again in the spring.

And then about a month after that, a construction crew working for Alectra dug up our boulevard to update the electrical grid and cut our cable again. Luckily I was working up at the church, because Rogers took a week and a half to respond that time, and people at home had no internet, phone, or TV that whole time. Back to the temporary line through the tree tops.

There followed months of constant construction, with roads and driveways and boulevards destroyed, fixed, and destroyed again when more work had to be done. The road on our corner was dug up and repaved at least three times in the same spot. Obviously someone was not communicating well. Our boulevard became the parking spot for the heavy equipment over the winter, though Alectra assured us they would fix all the damage in the spring. There was a constant roar of trucks and jackhammers and bulldozers and that annoying beeping of vehicles backing up. Finally, in about February, the construction ceased, the bulldozers were hauled away, and we were left with the remains of a battlefield.

Spring came. No sign of Alectra. The boulevards were left in such a state that I couldn't mow without bottoming out in craters or hitting plastic zip ties, chunks of wood, pooled asphalt, strips of metal, or broken pieces of cement.

Last week, after months and months of the temporary line, Rogers finally came and buried the new permanent cable for the third time. And two days later, Alectra sent a crew to rototill the boulevard to prepare it for re-sodding and -- you guessed it -- they cut the cable again. We ran out to show them where the cord was buried, but they basically shrugged, said it wasn't their problem, and rototilled that spot anyway. This time only my neighbour lost her internet and phone, but our cord -- still intact -- was left sprawled on the sidewalk, exposed, a tripping hazard, just asking to be snapped. My husband called Rogers and was told because the cable hadn't actually been cut, they would not send a worker out.

The next day a worker came out anyway. He tested our cable and said it was fine. We explained it was our neighbour whose line was cut, and we showed him the exposed cable lying on the sidewalk and boulevard. He went away again. An hour later a second, different Rogers worker showed up to fix my neighbour's line. And left again, leaving the cable still exposed. (He was just a technician, not a work crew.)

This morning another construction crew showed up and jackhammered out the exact same spot in the road that has already been dug up and repaved three or four times. They've been out there all day, putting down new asphalt over the hole they created.

I expect Alectra's crew will return shortly, I'm sure, to put down the new sod, and then Rogers will come a week or two after that to tear up the new sod and bury the cable again, and at some point I'm going to go berzerk, rip up the remaining sod, plant corn on the boulevard, throw my computer and phone and TV out the window, and become Amish.

Posted by Kristen McKendry at 21:38 No comments:

The hubby got creative again

A while ago, my husband saw a flawless light shade that someone was throwing out, and he brought it home, thinking maybe we'd find a use for it at the church. It's been in the garage for months. 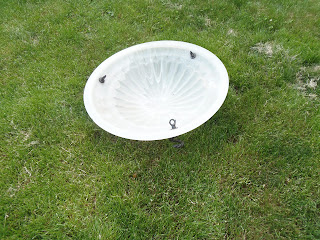 Then yesterday he saw a neighbour throwing out the pedestal of a small table. 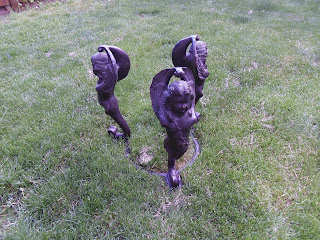 Now we have a birdbath! 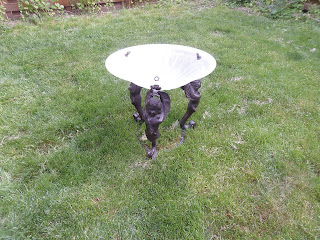 Posted by Kristen McKendry at 18:39 No comments:

As the Stay-at-Home order lifts...

It has been almost a year since I wore make-up. I have worn the same five shirts and three pairs of pants for the past 15 months until the fabric is practically see-through. I have had one professional haircut since March 2020.  I have gained about ten pounds. I have been waiting for over a year for an appointment with an orthopaedic surgeon. I break into a sweat at the thought of attending the dentist or going to church in person. I have watched every enticing thing on Netflix, much of it in other languages. I have re-done all my puzzles and re-read most of my books. I may never go to a restaurant or movie theatre again. I have missed 15 months' worth of family birthday and holiday get-togethers.

On the other hand, I have established a very satisfactory morning routine, without the former soul-draining 1.5-2 hour commute. I haven't spent $240 a month on transit. I have a comfortable couch. I've turned in four manuscripts. I've invested in an excellent internet service. I'm wishing I had invested in shares in Zoom. I've learned to groom my own dog (sort of). I've practised my Italian and taken a course on doing podcasts. I have started a new hobby of restoring stained glass. I have walked through the countryside so much -- in utter peace and contentment -- that my shoes have worn completely through. I've bravely ordered a new pair of slip-ons online, hoping that they fit. (It feels like gambling, but stores are still closed to in-person shopping.) The constant chatter in my brain has grown more still and quiet. I have finally accepted my inner introvert and given her permission to thrive. I've learned to say no when necessary without guilt.

Life is not going to return to normal. Not if I have any say about it. 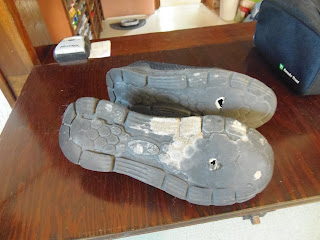 Posted by Kristen McKendry at 06:46 No comments:

The yard's in bloom and I'm missing it!

My yard doesn't tend to have colour in all seasons, primarily just in spring. But this year I'm up at the church for 8-9 weeks, so I haven't been able to be there to enjoy all the blooms.

Lovely Son #2 posted pictures for me today so I could see what's happening back home. Wasn't that sweet? 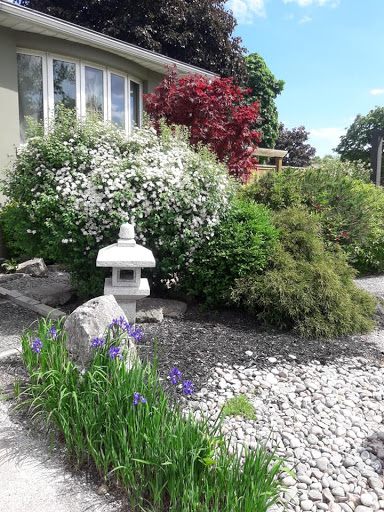 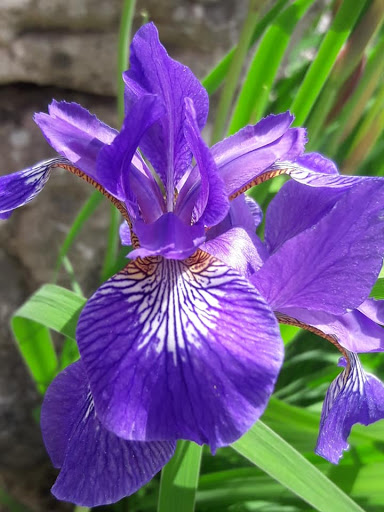 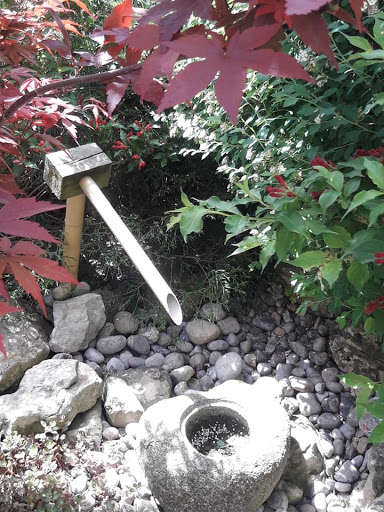 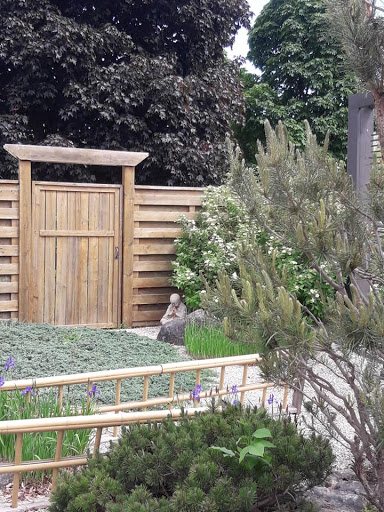 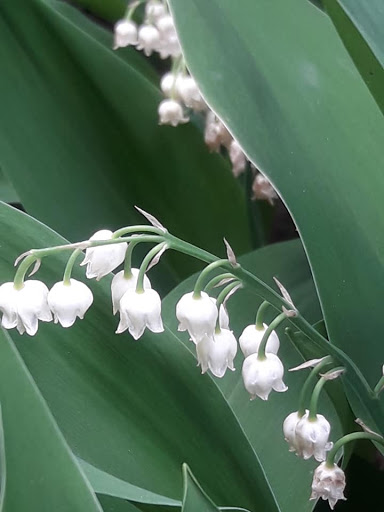 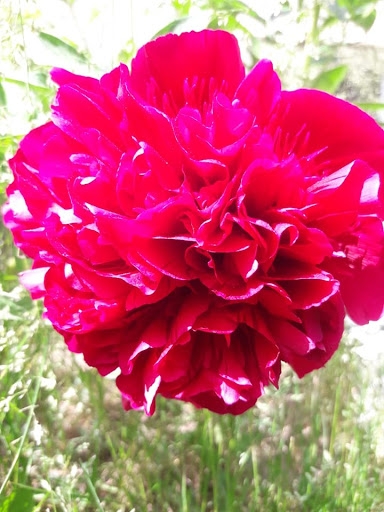 Posted by Kristen McKendry at 18:54 No comments:

Up at the church, the front beds have suddenly burst into life. I've never seen such healthy ferns! I didn't know they were there, since we bought this place in the fall when things had died back. I am rethinking my plan to put a bench there. I'm also glad that I haven't planted the vegetable garden at home yet -- it's going down to 3 degrees tomorrow. 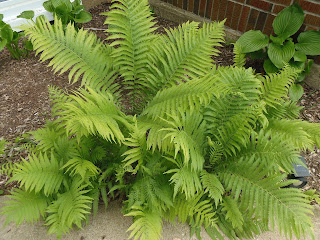 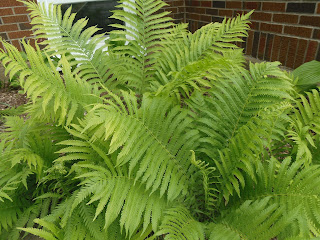 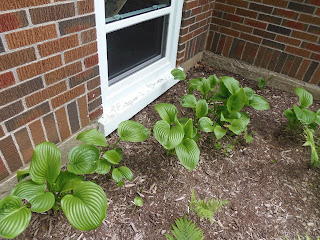 Posted by Kristen McKendry at 17:46 No comments:

Last night the neighbours lit up the sky with some pretty spectacular fireworks. Joyful noise! The dogs in the area didn't like it, though. Brio curled up tight against me and kept letting out little puffs -- half breath, half woofs -- of displeasure. I should watch the Young Victoria today.

Posted by Kristen McKendry at 06:05 No comments:

Life at the Church

An invitation to follow along on my other blog as the renovation progresses up at the church: 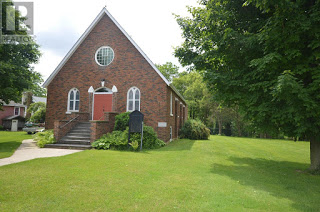 Posted by Kristen McKendry at 06:47 No comments: